The Sleeper and the Spindle by Neil Gaiman
My rating: 4 of 5 stars

One thing to say before I really break this down:

Okay, I admit, I was somewhat disillusioned after reading American Gods (full review here), but The Sleeper and the Spindle is a whole different deal entirely.

Let’s set the mood. Remember those fairytales you would read growing up, or perhaps even just watching the animation giant Walt Disney’s take on them? This book presents a setup in a very similar vein, so get comfy!

A young queen (whose name is not given) is a day from her wedding, when the dwarves show up, having learned of a supposed “sleeping plague” spreading through the kingdom and beyond. The queen decides to get to the bottom of the cause, having once been awoken from a long, almost deathly, sleep herself.

Oh, come on. I can’t be the only one reminded of this.

So the unnamed queen arms herself with a sword and sets off with the dwarves to find the source of the sleeping spell. The main problem is, the spell is spreading rapidly, and the queen has to worry that if she sleeps, she may not wake up again. I found this little bit to be particularly well thought out. It kept up the tension and suspense, that this innocent young woman could fall asleep forever, without any warning, at any moment.

Gaiman sometimes likes to switch gears in the middle of a scene, and sometimes he can get away with it, while other times, he really can’t. The transitions from scene to scene, setting to different setting, in this story were not perfect (some were a little confusing) but I was able to get my bearings and understand where the story was headed often very shortly after the transition was put in place.

Once we do switch gears, we are transported to a high tower surrounded by – what else? – a field of poisonous thorns. In that tower is a young woman who has been asleep for a very long time, and an old woman who we are led to believe is the one who caused the sleeping spell.


“The old woman reached down, and picked up the spindle. She said, aloud, ‘If I drove this spindle through your heart, then you’d not be so pretty-pretty, would you? Eh? Would you?’
She walked towards the sleeping girl in the dusty white dress. Then she lowered her hand. ‘No. I cannot. I wish to all the gods that I could.'” 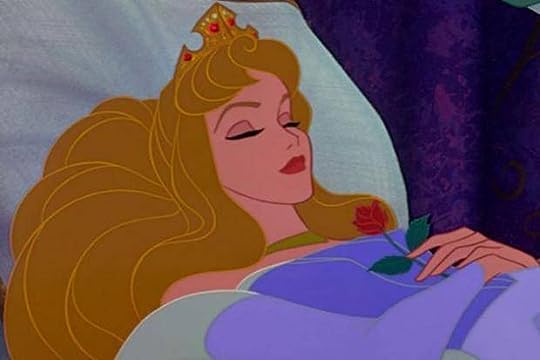 Again, I can’t be the only one reminded of this.

This is where things really started to get interesting, to me. Once the queen reaches the tower, and gets in, we see where it all started. First, she had to awaken the sleeping girl, and I have to admit, small as it was, I liked how the queen had zero qualms about waking the girl the way she did. 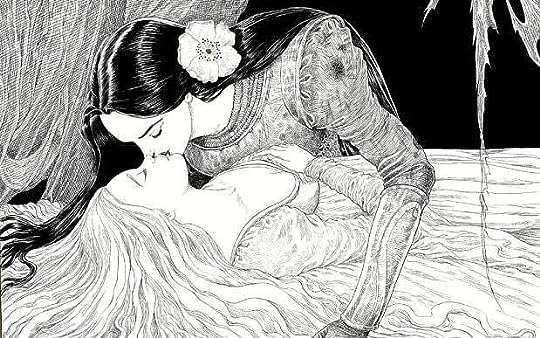 Considering the time period of the story, I like this. A lot.

However, once the girl awakens, we find that things aren’t that simple. But then, when are things ever that simple in a Gaiman work?

‘It was your life. You gave it to me,’ said the sleeper, irritably.”

And we see that, sometimes, evil is encased in beauty. I loved that aspect of the story! It came completely out of nowhere and it was the perfect way to show who the old woman and the sleeping girl really were. What we expected all along ended up doing a total 180 and suddenly things aren’t so clear-cut anymore.

But then, when is life ever that clear-cut?

A short book with a surprisingly powerful message. A dark twist on two fairytales we all think we know, a twist that left me reeling shortly after I’d finished it. This is, again, an example of the masterful storytelling Gaiman is capable of. 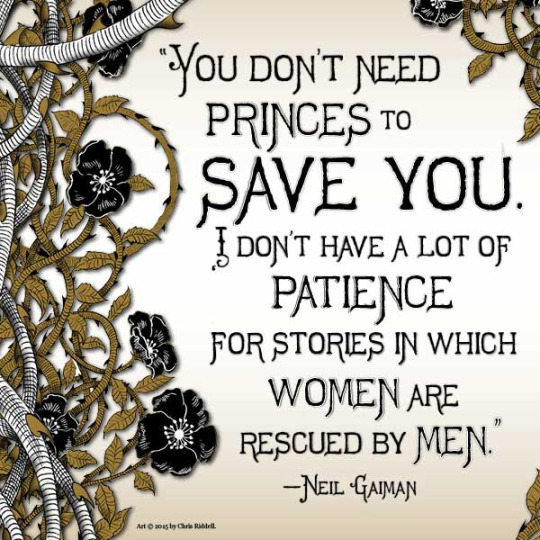 The perfect sentiment to describe this story. Well done, Gaiman!